First, this is a transcript and further development of a talk I once gave on the notion of the Situated Story.

The idea of a Situated Story has ancestors in the Locative Story, the Transmedial Story, the Installation, and probably in site specific performance.

The development from crossmedia to transmedial stories was primarily identified by MIT Professor Henry Jenkins in Convergence Culture – where old and new media collidebut the concept and the way of working is developed by various media producers. Jeffrey Gomez of Starlightrunner entertainment claims to be the first person using the term. A transmedial story is a participatory fiction, delivered through various complementary media platforms. Most often with one driving platform: TV, film or game, where the prime plotline or story experience is developed; and a whole lot of other platforms, websites, tweeps, events, books, found objects, etc, that enrich the story world, and that offer added story lines, characters and various kinds of access and playability to the participating audience – that are known as vup’s (from viewer/user/player – term attributed to Stephen Dinehart.

Situated stories do not transport the vup to an imaginary ‘elsewhere’. They allow reality to continue and to play its part. They weave a fiction into reality. Situated stories are porous. They function on the combination of reality and fiction. With that they explore and bring to life the gaps between the mediations. From where I sit, that is what makes them work, and what makes them exciting. Situated stories open vup’s to reality as fiction. They operate on the ‘willing suspension if disbelief’. An important key is setting, both in terms of the locations where the work is happening, but also in the media employed to deliver elements of content or experience. To find the right mix between what’s already there (or what’s happening while present) , and the constructed mediations is more of a tactical operation then a strategic operation.

The assignment here is to develop and realise a situated story or situated experience with the following constraints:
• Use at least three different media platforms and at least one physical location in Amsterdam.
• Your starting point should be documentary – but you can use fiction as well.
• Time frame: you have a total of 6 weeks to FINISH the assignment. Presentation is at november 2.

Janet Cardiff’s Ghost Machine
Duncan Speakmans Subtlemob
BlastTheory’s Uncle Roy All Around You Do have a look at the descriptions of their other work as well. Highly recommended.
Then there is the notion of Terratives location based stories, and ‘moving stories’ – clearly related, but with different focus, and some other required elements. In the Mobile City blog there is a comprehensive post. .
Martin Butler’s The Watchers was part of the Street Canvas Festival in Haarlem last week. There were more works (/projects) that rub shoulders with the notion of the Situtated Story. Check out Jetske de Boers website. and her project at StreetCanvas.
And maybe Improv Everywhere’s Frozen Grand Central

A bit of narrative theory

Fabula versus sujet (both terms derived from the works of Russian constructivist Vladimir Propp, specifically The Morphology of the Folk Tale 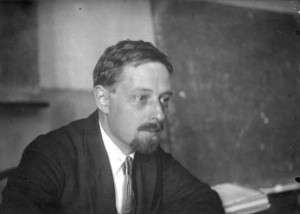 French post-structuralists took issue with the implicit hierarchy and rigid relation between these notions. The above scheme suggests that there is a clear cut relation between a narrative and the events that are narrated. A narrative is a selection and re-ordering, of representations of events. In certain kinds of stories this is certainly the case: The effect of plot-based thrillers, detectives, and for instance the Harry Potter books relies on a very tight relation between ‘events’ and ‘narration’ with the author in firm grip of the precise way in which the plot reveales the fabula. These are what Barthes would call readerly texts.

Very often, though, the relation is much more hazy, mutual and sometimes more exciting: most often there are no ‘events’ outside the narrative. The only way one can imagine events is through their narrative representation – most often there IS only a linear set of narrative elements. The reader constructs (interprets) a fabula out of the bits of narrative presented, by filling in what wasn’t told, by second-guessing motives, moods, etcetera. Also, a narrative text obviously does not only relate to events outside the text, but to a whole network of other texts as well. A network that is partly familiar to the reader, and that suggests meanings, or may shift obvious meanings in the process of reading (‘performing the text’) Texts that employ these mechanisms, are texts that Barthes would call writerly texts.
For reference, check Image, Music, Text, by Roland Barthes – specificallly: The Death of the Author.

An almost didactical example of exciting but unsolvable complexities in the relation between fabula and plot is the film Rashomon by Akira Kurosawa. The kind of interpretative problem that Rashomon poses is known as the Rashomon effect.

In the context of this assignment it is important to notice that the various media used to deliver narrative elements are not only representing events, but are part of the (potential) construction of the fabula, both by the author as well as by the user/viewer/player (‘vup’). For example: the following text is read (‘performed’) differently by the reader when it is delivered in the form of a personal email, or printed in a novel.

Subject: Awaitting your responce.
My name is Danjuma Sule, one of the sons of major Gen Gumel Danjuma Sule, The late Nigeria’s former minister of mines and power in the regime of the late former Nigeria’s military Head of state, Gen Sanni Abacha.
He married my mother on the agreement that my mother,Amina Fausat Sule, will maintain her family’s name together with her children. Before he died in the German hospital on the 15th of November 1988 where he went to operate on the cancer of the knee, he fixed the Sum of $30,000.000.00 in the Central Bank of Nigeria under Intartrade Ventures Ltd on behalf of my mother. The 3 yrs maturity period placed on the money is due but the problem we are having now is that we lost the whole of the documents as a result of fire, which gutted our house 3 months ago. (etc.)

(The first time I received 419 scam-spam, I thought it was part of an interactive narrative experiment.)

Samual Taylor Coleridge (1772-1834), English lyrical poet, critic, and philosopher, who wrote, with William Wordsworth Lyrical Ballads(1798), thereby starting the English Romantic movement, coined the term ‘suspension of disbelief’:
“In this idea originated the plan of the ‘Lyrical Ballads’; in which it was agreed, that my endeavours should be directed to persons and characters supernatural, or at least romantic, yet so as to transfer from our inward nature a human interest and a semblance of truth sufficient to procure for these shadows of imagination that willing suspension of disbelief for the moment, which constitutes poetic faith.”

So, suspension of disbelief is based on a transfer of human interest and constitutes poetic faith. This performative movement by the ‘reader’ is most clearly required when the reader consumes fiction (of which it is clear that it cannot have happened ‘for real’) but it is actually a required action in the experience all kinds of narratives, or even more broadly, mediations. The ‘willing suspension of disbelief’ iI would say, is more or less the basic deal that authors make with their audiences. An author provides a number of selected and constructed signs, that also establish (or perceivably relate to) a reference frame, that allows the reader to be able to relate to the signs in and of the text. I understand the notion of ‘suspension of disbelief’ along the lines of play. (Huizinga’s book is integrally available online) So, the movement of suspending ones disbelief, is an acceptance of an invitation to play.
Huizinga introduces the concept of ‘the magic circle’ that, through deeply embodied intuition, separates the area of play from that of surrounding ‘reality’. This idea kind of works to describe the (experientially obvious) boundary around play, but it is philosophically (‘ontologically’) quite problematic. Certainly in our media-saturated environment, every area of play is nested within larger area’s, that refer to each other and constitute each other, both upwards, in the direction of the nesting area’s of play, mediation and culture, and downwards, in more nested area’s of play. In other words: the moment you no longer suspend your disbelief in a mediation but actuate your disbelief, is the moment you start to suspend you disbelief in a larger (or different) frame.
(Whether there is an ‘ultimate frame’ or not, is than a matter of ultimately suspending ones disbelief, and I guess that is the same as faith. )

Along these lines, the readerly text can be understood as a fully coherent mediated (textual) microcosm, that contains no disruptive signs of its construction. The writerly text, on the other hand, may point to its construction, and contains signs that point to frames outside the microcosm. The writerly text, however, still also works by the ‘willing suspension of disbelief’ but that is operating on more than one frame (or played on more than one board) at the same time.

(For me, play is one of the most important and generally useful notions at work in the context of art and culture. )

A Situated Story self-consciously asks the audience to include in their narrative experience (‘to suspend their disbelief over’) an area clearly outside the ‘magic circle’, outside the media constructions of the maker, so the audience willingly experiences as play what s/he knows to be ‘real’.

The fact that people can’t help but project causal relations (‘create a story’) between events that happen or that are presented simultaneously may point to a notion of story as primarily a category of perception. That would again link nicely with Daniel Dennett‘s radical Darwinistic theories about the emergence of consciousness. In Dennett’s c.s. theory, consciousness emerged as the ability to successfully predict the future. The ability to avoid life threatening circumstances (by predicting them correctly) would Darwinistically push survival rate.